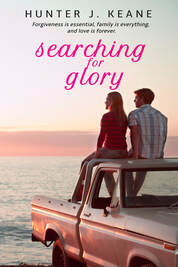 Gloria Star is rich and famous. She's on a hit television show and engaged to one of the most desired men in Hollywood. Her life is perfect. But then she gets a letter in the mail that changes everything. The past she has been trying to forget for so long has finally come back to haunt her.

Gloria Star hasn't always been an A-list celebrity. She used to be just a regular Midwestern girl named Glory Stark. Now she is forced to reconcile her two lives because Johnny Carter, the only man she ever loved, has asked her to return to her hometown, and she can't say no. Ten years ago, one night changed everything for Gloria and Johnny. Not only did Gloria lose Johnny, but she also lost herself.

Now she's headed back to Princeton, Missouri, to reconnect with her sister and make amends with Johnny. She quickly realizes that returning to Glory Stark's life isn't going to be easy. As she faces painful truths about her past and an uncertain future, Gloria learns that forgiveness is essential, family is everything and love is forever.
Powered by